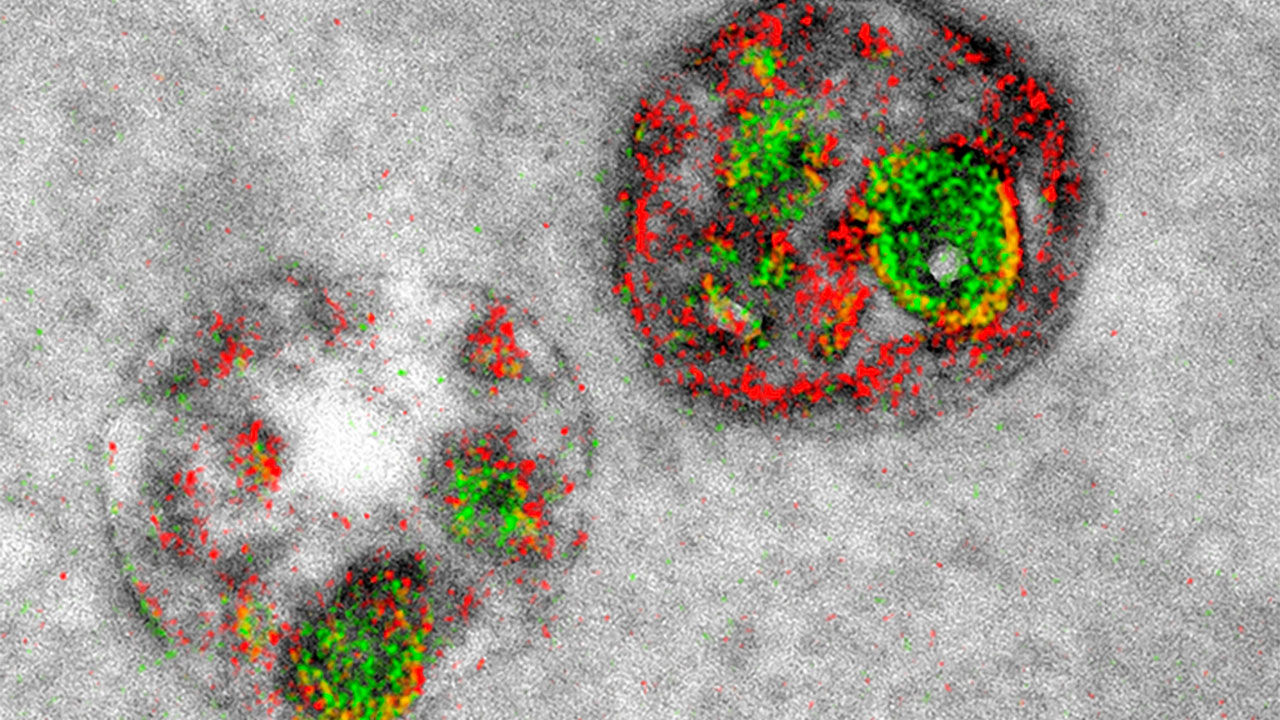 While current therapies for HIV can successfully manage active infection, the virus can survive in tissue reservoirs, including macrophage cells, and remain a persistent problem. Now, Dr. David Russell, William Kaplan Professor of Infection Biology at Cornell University College of Veterinary Medicine, and his research team have pinpointed a novel angle of attack that could selectively eradicate these viral reservoir cells while leaving healthy cells untouched.
In their study published in the journal PNAS, Russell’s team, lead by first author and postdoctoral fellow Dr. Saikat Boliar, describe how a genetic regulator called SAF helps HIV-infected macrophages avoid cell death. After blocking SAF in HIV-infected cells, the researchers found that these reservoir cells then self-destructed. “We were all surprised by the specificity of the cell death,” says Russell. “Only infected cells die while bystander cells, exposed to the same treatment at the same dose, showed no death at all.”

While macrophages, immune cells that consume foreign entities in the body, are helpful in fighting off certain microbes, they provide the perfect foxhole for HIV. Some researchers believe these infected macrophages are the reservoirs for persistent HIV infection. “Current HIV drugs work really well on active infection, but it is the tissue reservoirs that are the problem,” Russell explains. “These sites of persistent virus are resistant to all current therapies.”

Russell, Boliar, and their colleagues wanted to investigate what cellular mechanisms were at play that helped keep infected macrophages alive, and turned their attention to long non-coding RNAs (lncRNAs)—genetic coding elements that turn genes up or down, but do not translate directly into proteins themselves. “We were interested in long-noncoding RNAs because they are known ‘master regulators’ of cell pathways, and had not really been looked at systematically in HIV infection,” Russell explains.

The team screened a panel of 90 well-characterized lncRNAs in three distinct populations; of human macrophages: healthy cells; HIV-infected cells, and ‘bystander’ cells—those that had exposed to HIV, but not infected. The investigators found that one lncRNA, called SAF, was significantly up-regulated in the HIV-infected macrophages. Previous studies had found that SAF prevented apoptosis, or self-destruction, in cells. Russell and his team suspected SAF was protecting HIV-infected macrophages from dying.

To prove this theory, the team blocked SAF’s action; using another non-coding RNA called small interfering RNA (siRNA); which effectively degrade targeted RNAs such as SAF. The researchers silenced SAF in the healthy, infected, and bystander macrophage populations; the HIV-infected cells suddenly self-destructed, while the healthy and bystander cells remained unscathed. “This showed us that when cells are; infected with HIV; the virus alters the long non-coding RNAs’ expression in that cell,” says Russell.

This would explain why bystander cells that are; exposed to the HIV virions; but not actually infected by them, do not have the same response. This discovery taps into a novel angle in curing HIV; selectively destroying persistently infected cells; and the Russell team is eager to exploit it for potential therapies. “We plan to do a drug screen for compounds; that drive HIV-infected cells into programmed cell death,” says Russell.