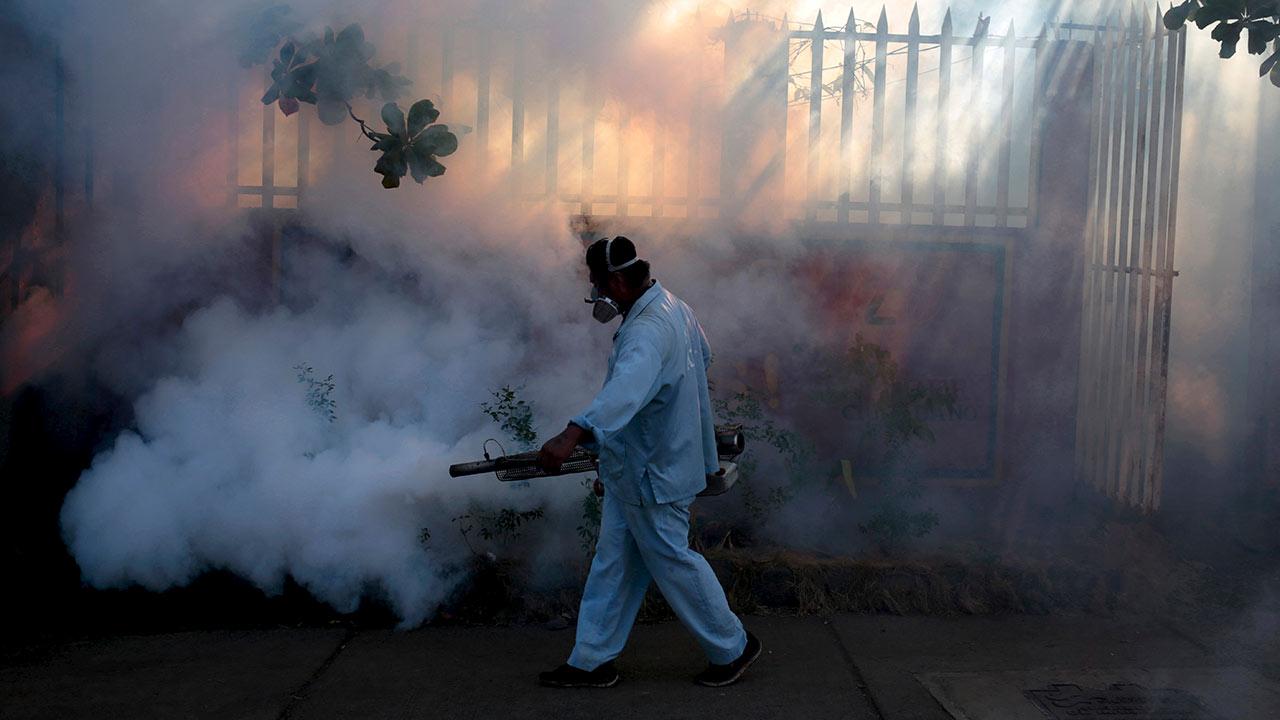 Forecasting the impacts of climate change on Aedes-borne viruses—especially dengue, chikungunya, and Zika—is a key component of public health preparedness. We apply an empirically parameterized model of viral transmission by the vectors Aedes aegypti and Ae. albopictus, as a function of temperature, to predict cumulative monthly global transmission risk in current climates, and compare them with projected risk in 2050 and 2080 based on general circulation models (GCMs).  Our results show that if mosquito range shifts track optimal temperature ranges for transmission, we can expect poleward shifts in Aedes-borne virus distributions. However, the differing thermal niches of the two vectors produce different patterns of shifts under climate change. More severe climate change scenarios produce larger population exposures to transmission by Ae. aegypti, but not by Ae. albopictus in the most extreme cases.

Climate-driven risk of transmission from both mosquitoes will increase substantially, even in the short term, for most of Europe. In contrast, significant reductions in climate suitability are; expected for Ae. albopictus, most noticeably in southeast Asia and west Africa. Within the next century, nearly a billion people are; threatened with new exposure to virus transmission by both Aedesspp. in the worst-case scenario. As major net losses in year-round transmission risk are; predicted for Ae. albopictus, we project a global shift towards more seasonal risk across regions. Many other complicating factors (like mosquito range limits and viral evolution) exist, but overall our results indicate that while climate change will lead to increased net and new exposures to Aedes-borne viruses, the most extreme increases in Ae. albopictus transmission are; predicted to occur at intermediate climate change scenarios.

Mosquito-borne viruses, such as dengue, chikungunya, and Zika, already threaten over a billion people globally. A study published in PLOS Neglected Tropical Diseases predicts that climate change; and rising global temperatures will lead to both increased and new exposures; to humans of diseases carried by mosquito vectors Aedes aegypti and Ae. albopictus. The most extreme instances of transmission are predicted; to occur at intermediate climate change scenarios. Sadie Ryan of the University of Florida and her colleagues; forecasted climate change impact on virus-carrying mosquitoes by adapting a previously developed Bayesian transmission model. The researchers’ adaptation of the model allowed them to track shifting weather warming scenarios to determine where mosquitoes will migrate and how the number of disease transmissions will change over the next century.

However, Ae. aegypti is estimated to have a higher thermal optimum for transmission than Ae. albopictus. The researchers’ results show that when the mosquito range shifts within optimal temperature ranges for transmission; we can expect poleward shifts in Aedes-borne virus distributions. While disease transmission to humans is predicted to increase in Europe, transmission from Ae. albopictus may decrease in southeast Asia and west Africa when the researchers’ worst-case scenario is applied. So, counter-intuitively, a middle-of-the-road temperature increase could produce the greatest expansion in viral transmission by Ae. albopictus, as opposed to hypotheses that predict a paralleled increase in temperature with illness — a model that predicts a warmer, sicker world. “The dynamics of mosquito-borne illnesses are climate-driven, and current work suggests that climate change will dramatically increase the potential for expansion and intensification of Aedes-borne virus transmission within the next century,” the authors note.