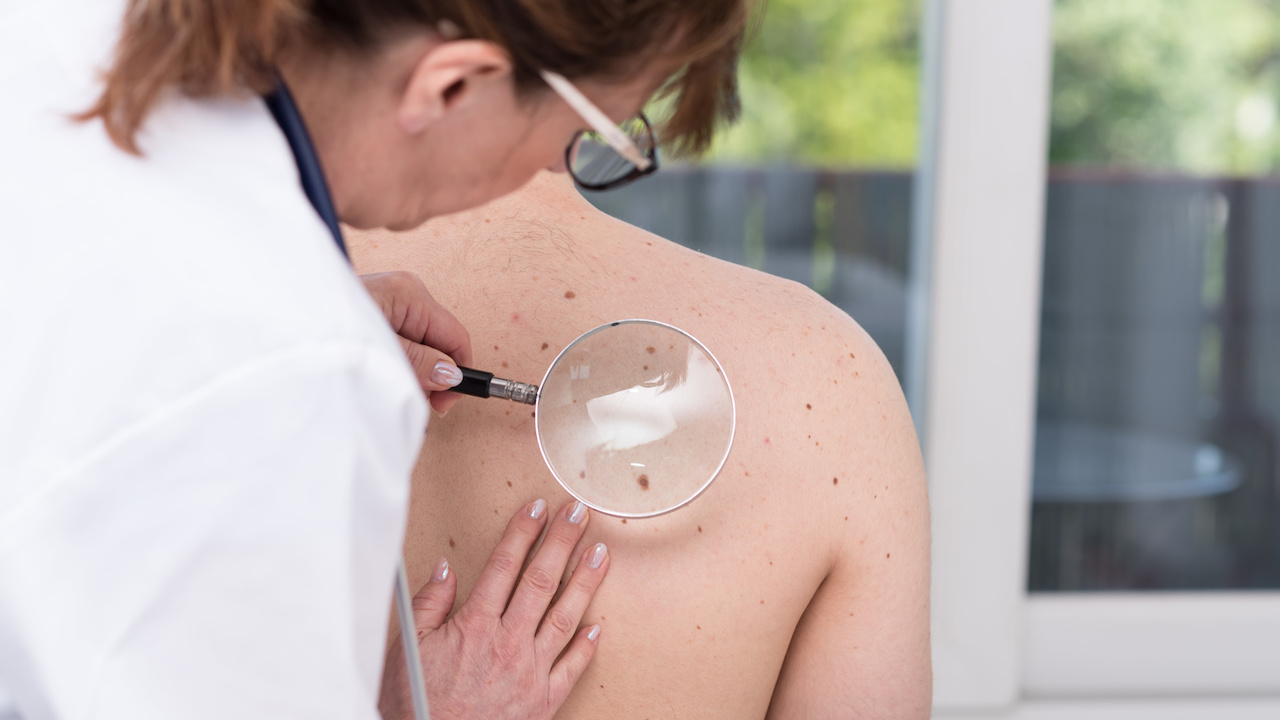 Melanoma, also known as malignant melanoma, is a type of cancer that develops from the pigment-containing cells known as melanocytes. Melanomas typically occur in the skin, but may rarely occur in the mouth, intestines, or eye. In women, they most commonly occur on the legs, while in men they are most common on the back. Sometimes they develop from a mole with changes such as an increase in size, irregular edges, change in color, itchiness, or skin breakdown.

The primary cause of melanoma is ultraviolet light (UV) exposure in those with low levels of skin pigment. The UV light may be from either the sun or from other sources, such as tanning devices. About 25% develop from moles. Those with many moles, a history of affected family members, and who have poor immune function are at greater risk. A number of rare genetic defects such as xeroderma pigmentosum also increase risk. Diagnosis is by biopsy and analysis of any skin lesion that has signs of being potentially cancerous.
Malignant melanoma; a particularly dangerous form of cancer, and more therapeutic options are important. Now, researchers report in ACS Medicinal Chemistry Letters that a bacteria from seawater has inspired promising leads for an entirely new way to treat the disease. In melanoma, cancer cells form in melanocytes, the cells that color the skin. While new cases of most types of cancer are declining, those of melanoma — the deadliest form of skin cancer — continue to climb, according to the U.S. Centers for Disease Control and Prevention. If melanoma metastasizes, or migrates to other locations in the body, prognosis is poor and treatment options are limited.

New chemotherapy agents recently approved that target melanomas with so-called “BRAF” mutations; but some of these tumors are already showing resistance to these therapies. William Fenical, James J. La Clair, Leticia Costa-Lotufo and colleagues decided the best solution; would be to take aim; at a completely different biochemical pathway in melanoma. In 2014, the researchers discovered that seriniquinone; a natural product isolated from a rare marine bacteria, showed potent and selective activity against melanoma cells in a test tube.

Even better, it was the first small molecule ever shown to target a particular protein involved in cancer proliferation. In their new work, the team identified the structural components of the natural product that were key to its activity, and then modified other parts of the molecule to make it more water soluble nd easier to purify. Both these steps are necessary to make it more suitable as a drug. The researchers are now further refining these seriniquinone derivatives to optimize activity against melanoma.​