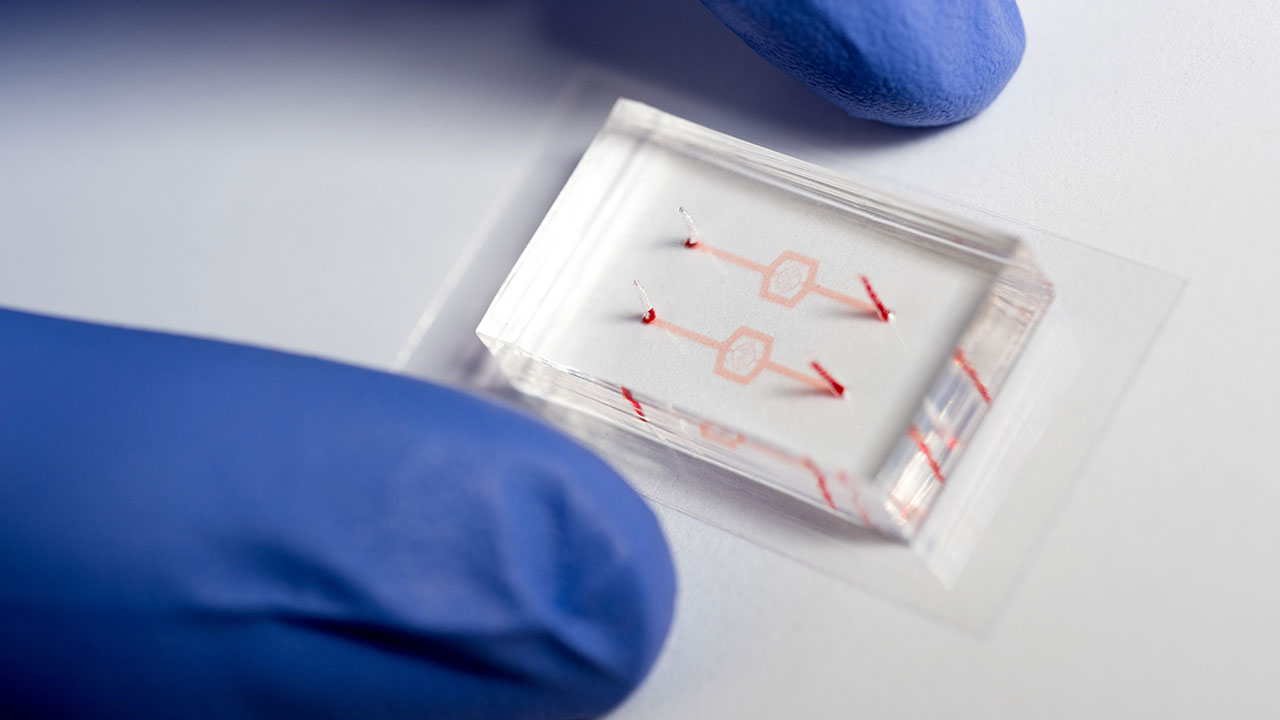 A simple innovation the size of a grain of sand means we can now analyze cells; and tiny particles as if they were inside the human body. The new micro-device for fluid analysis will enable more tailored experiments in drug development and disease research via new ‘organ-on-chip‘ systems. It could also transform water contamination testing and medical diagnosis in natural disaster zones; where its low cost, simple use and portability make it a practical tool almost anyone can use.

Microfluidic or ‘lab-on-a-chip’ devices are commonly using blood and other fluid samples; which are pumping through narrow channels in a transparent chip the size of a postage stamp. This new chip takes that technology one step further by adding a three-dimensional cavity along the channel; think of a narrow tunnel that suddenly opens into a domed vault; which creates a mini-vortex where particles spin around, making them easier to observe.
To make this cavity, researchers inserted a liquid metal drop onto the silicon mould when making the chip. The liquid metal’s high surface tension means it holds its form during the molding process. Finally the liquid metal is removing, leaving just the channel and a spherical cavity ready to use as a mini-centrifuge; explained RMIT engineer and study co-leader Dr Khashayar Khoshmanesh.
“When the fluid sample enters the spherical-shaped cavity, it spins inside the cavity,” he said. “This spinning creates a natural vortex, which just like a centrifuge machine in an analytics lab; but spins the cells or other biological samples, allowing them to be studied without the need for capturing or labeling them.” The device only requires tiny samples, as little as 1 ml of water or blood; and using to study tiny bacterial cells measuring just 1 micron, all the way up to human cells; as large as 15 microns.

A platform for studying cardiovascular diseases

Study co-leader and RMIT biologist, Dr Sara Baratchi, said the device’s soft spherical cavities; but could be used to mimic 3D human organs and observe how cells behave in various flow conditions or drug interactions. “The ability to tailor the size of the cavity also allows for different flow situations to be simulated this way; but we can mimic the response of blood cells under disturbed flow situations; for example at branch points and curvatures of coronary and carotid arteries, which are more prone to narrowing,” she said.
This capability will be of interest to Australia’s booming biomedical industry, with medical apparatus; being among our top 10 exports in 2018 and worth $3.2 billion. Baratchi said the discovery was making possible through collaboration, with technologists; from the School of Engineering and mechano-biologists in the School of Health and Biomedical Sciences; joining forces in RMIT’s Mechanobiology and Microfluidics research group.

“Biologists like myself have been struggling to study the impact of flow-associated forces on circulatory blood cells. Now this miniaturized device developed with our engineering colleagues does exactly that,” Baratchi said. “It’s an ingenious solution that really highlights the value of cross-disciplinary research.” But some of the most exciting applications could also be outside the lab.

A cheap and portable water test that anyone can use

Another promising application is for identifying parasites and other infections in waterways, especially in developing countries. “Detection of water impurities can be a difficult task because you do not always know exactly what you’re looking for,” Khoshmanesh said. “But with this device the impurities will be captured and orbited by the vortex without any special sample preparation, saving time and money.”
Whether used for analyzing water or blood samples, the low cost and portability of the device makes it attractive for a whole range of applications. The same research group recently developed a pressure pump, made from latex balloons, to operate the device. Unlike conventional pumps, which can be as large as a shoebox and cost thousands of dollars, theirs is low cost and portable.
“Simplicity is a very important parameter for our designs because that often translates to lower cost and great applicability outside the lab,” Khoshmanesh said. “Our new microfluidic device, combined with our pump and a smartphone capable of capturing high-speed images, makes a low-cost, self-sufficient and entirely portable point-of-care diagnostics device.”