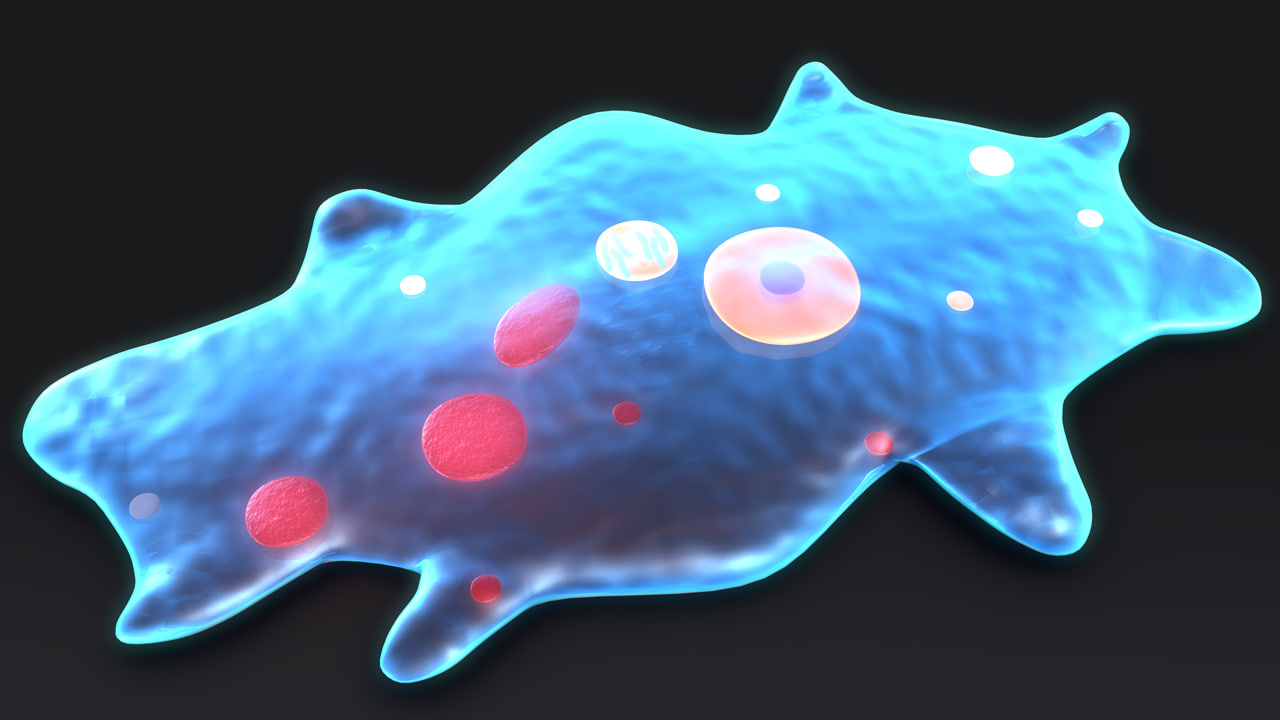 A parasitic amoeba that causes severe gut disease in humans protects itself from attack by biting off pieces of host cells and putting their proteins on its own surface, according to a study by microbiologists at the University of California, Davis. “We’re very excited about how this ties into amoebic infection and into broader themes in cell biology,” said Katherine Ralston, assistant professor in the Department of Microbiology and Molecular Genetics, College of Biological Sciences. A paper describing the work appears in the journal mBio.

Entamoeba histolytica causes severe diarrheal disease, mainly in tropical countries. It lives in the gut, causing ulcers and bleeding. In severe cases it can break out and invade other organs. Ralston studied Entamoeba during postdoctoral work at the University of Virginia. Amoebae and many other cells — including some that protect us from disease — are known to “eat” other cells by engulfing them completely, a process called phagocytosis.

Ralston discovered that Entamoeba could also pinch off small pieces of human cells. She called this process trogocytosis or “cell nibbling.” “The amoeba quite literally takes bites out of other cells,” Ralston said. “This nibbling is how it attacks individual cells, and we think this is how it causes ulceration and damage to the human intestine.” Cell nibbling has also been described in other parasitic amoebae — and also in multicellular organisms. Immune system cells, for example, can swap pieces of their surface with each other by biting them off.

The body produces a set of proteins in the blood, called “complement,” that can attack parasites and bacteria. Your own cells carry proteins; that prevent them from being; attacked by complement. Miller, Ralston and Rene Suleiman, another graduate student in the lab; found that when the amoebae; put in contact with human cells; they could take these protective proteins; and put them on as a sort of “complement camouflage.” Regular Entamoebae were killed by human serum, but amoebae that had camouflaged themselves survived.

This camouflage could protect them from complement as they migrate through the blood around the body, Miller said. Miller and Ralston are now working; to understand which proteins; transferred, how they interact with complement; and what happens to these proteins; after they nibbled off another cell. Do they go straight into the amoeba’s membrane, or are they processed internally first?

They also want to know more about trogocytosis in general. Why are some cases benign, but others lead to cell death? The process may also be important for understanding behavior of cancer cells and how they can be killed.”We’re really excited that this decoration with acquired proteins might apply to trogocytosis in general, because we’re realizing that it’s important in so many contexts,” Ralston said.