The US Countries Most Prone To Measles Outbreak 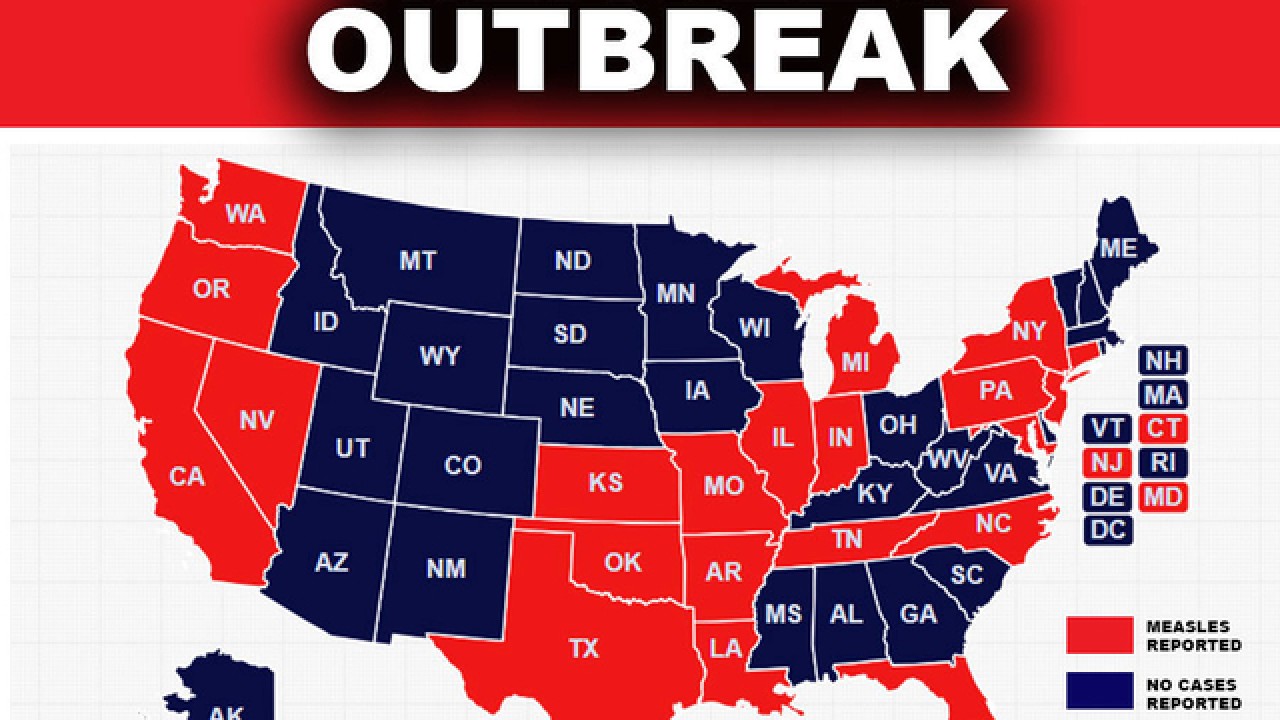 Twenty-five counties across the country identifying to be most at risk for a measles outbreak; due to low-vaccination rates compounded by a high volume of international travel; according to an analysis by researchers at The University of Texas at Austin and Johns Hopkins University. Since January 2019, there have been more than 700 confirmed measles cases; in 22 states nearly double the amount of last year; and the highest number reporting since the virus was eradicating in the United States in 2000.
In a paper published in The Lancet Infectious Diseases, researchers warn the epidemic will worsen; identifying the 25 counties that are most at risk for an outbreak. Their analysis considered an area’s volume of international travel from foreign countries; with large measles outbreaks and the prevalence of non-medical exemptions from childhood vaccinations.
“For measles, most experts believe that there will be one to two deaths per 1,000 cases, most likely infants. We are set to see over 1,000 cases in the U.S. in 2019. So, for the first time since the 1980s, we may expect infant deaths from measles in the U.S.,” said the study’s lead author, Sahotra Sarkar, a philosophy and integrative biology professor; at UT Austin and an expert on public health. “We have long known that vaccine avoidance is a critical public health issue in the U.S. and Europe. Our results show how travel from regions elsewhere compounds this risk.”

The measles cases in New York

Sarkar and his team’s measles risk analysis correctly predicted areas in Washington, Oregon and New York; that are already experiencing major outbreaks. Furthermore, 30 of the 45 counties that have reported measles cases to the Centers for Disease Control and Prevention; were either included on the researchers’ list of 25 high-risk counties or are adjacent to a county listed.

“Critically, we recommend that public health officials and policymakers prioritize monitoring the counties; we identify to be at high risk that have not yet reported cases; especially those that lie adjacent to counties with ongoing outbreaks and those; that house large international airports,” said Lauren Gardner, an associate professor of civil engineering; at Johns Hopkins and a UT Austin engineering alumna.

Researchers warned the most at-risk areas that have yet to report a case; are those near international airports, such as Travis County in Texas, Honolulu County, Salt Lake County; and multiple counties in Florida. The Study showed that travel from countries such as India, China, Mexico, Japan, Ukraine, Philippines and Thailand; appears to pose the greatest measles risk. The U.S. has already seen measles cases imported from Ukraine, Philippines and Thailand.

Beyond the study, researchers suggest the risk analysis be applied to other vaccine-preventable illnesses, such as mumps, rubella and pertussis, and should be used to inform public health policy in an age when non-medical exemption rates are becoming increasingly prevalent.
“The vaccine avoidance problem is not limited to measles. Pertussis whooping cough is another disease making a comeback because of dropping vaccination rates, and we predict serious outbreaks in the U.S. in the near future,” Sarkar said. “Policymakers must focus on centers of vaccination refusal as well as regions with a lot of passenger inflow from affected countries worldwide if there are even small local pockets of un-vaccinated people.”