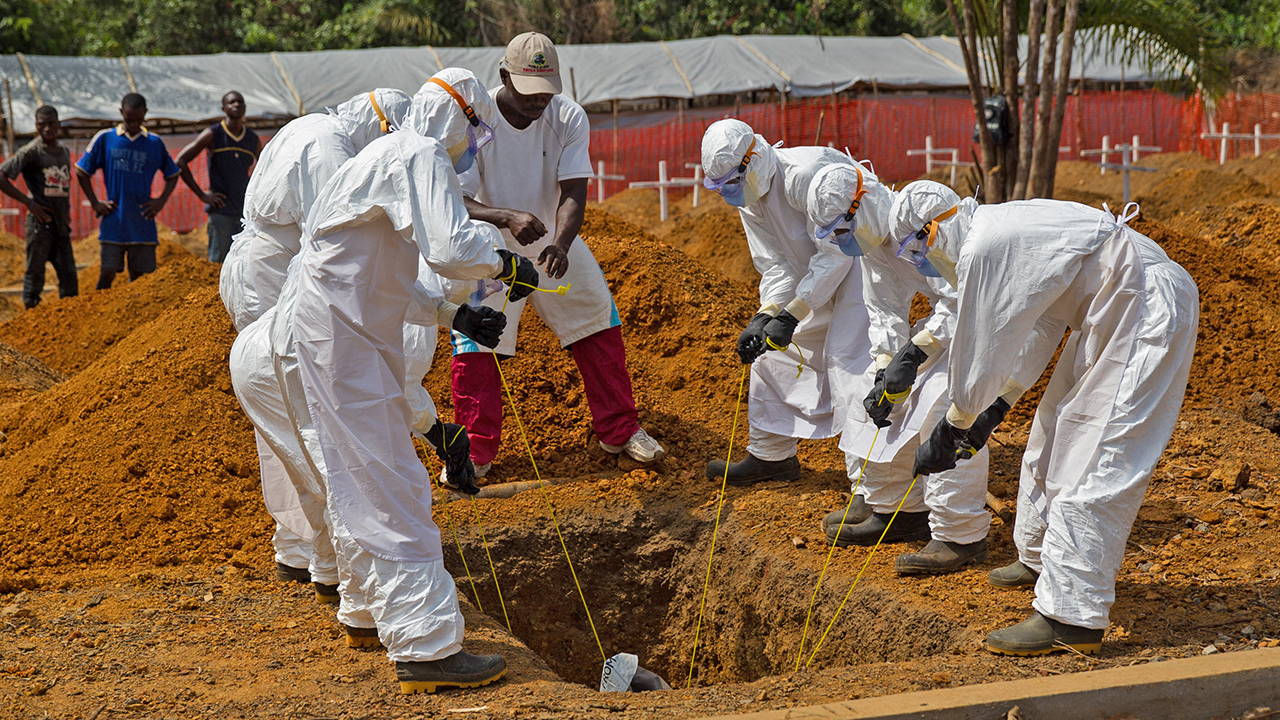 Ebola virus disease (EVD), also known as Ebola hemorrhagic fever (EHF) or simply Ebola; is a viral hemorrhagic fever of humans and; other primates caused by ebola viruses. Signs and symptoms typically start between two days and three weeks after contracting the virus with a fever, sore throat, muscular pain, and headaches. Vomiting, diarrhea and rash usually follow, along with decreased function of the liver and kidneys.

At this time, some people begin to bleed both internally and externally. The disease has a high risk of death, killing between 25 and 90 percent of those infected, with an average of about 50 percent. This is often due to low blood pressure from fluid loss, and typically follows six to sixteen days after symptoms appear.

The virus spreads through direct contact with body fluids, such as blood from infected humans or other animals. Spread may also occur from contact with items recently contaminated with bodily fluids. Spread of the disease occurred through the air between primates, including humans, documented in either laboratory or natural conditions.

Semen or breast milk of a person after recovery from EVD may carry the virus for several weeks to months. Fruit bats are believed to be the normal carrier in nature, able to spread the virus without being affected by it. Other diseases such as malaria, cholera, typhoid fever, meningitis and other viral hemorrhagic fevers may resemble EVD. Blood samples are tested for viral RNA, viral antibodies or for the virus itself to confirm the diagnosis.

An Ebola vaccine is under investigation

Control of outbreaks requires coordinated medical services and community engagement. This includes rapid detection, contact tracing of those who have been exposed, quick access to laboratory services, care for those infected, and proper disposal of the dead through cremation or burial. Samples of body fluids and tissues from people with the disease should be handled with special caution.

Prevention includes limiting the spread of disease from infected animals to humans by handling potentially infected bushmeat only while wearing protective clothing, and by thoroughly cooking bushmeat before eating it. It also includes wearing proper protective clothing and washing hands when around a person with the disease. An Ebola vaccine is under investigation in Africa with promising results.

No specific treatment is available, although a number of potential treatments under investigation. Supportive efforts, however, improve outcomes. This includes either oral rehydration therapy (drinking slightly sweetened and salty water) or giving intravenous fluids as well as treating symptoms.
The disease was first identified in 1976 in two simultaneous outbreaks; one in Nzara (a town in South Sudan) and the other in Yambuku (Democratic Republic of the Congo); a village near the Ebola River from which the disease takes its name. EVD outbreaks occur intermittently in tropical regions of sub-Saharan Africa. Between 1976 and 2013, the World Health Organization reports a total of 24 outbreaks involving 1,716 cases.

The largest outbreak to date was the epidemic in West Africa; which occurred from December 2013 to January 2016 with 28,616 cases and 11,310 deaths. The declaration was that no longer an emergency on 29 March 2016. Other outbreaks in Africa began in the Democratic Republic of the Congo in May 2017,and 2018.
The deadly Ebola outbreak in eastern Congo is marking six months; with officials noting a worrying number of confirmed cases linked to health centers. Such infections, seen as a major problem that highlights poor practices and the risk of spread among patients and workers. Combined with community resistance in an unstable; densely populated region that has never faced Ebola before, the task of containing the outbreak remains challenging.

In the current epicenter, the communities of Butembo and Katwa, 86 percent of Ebola cases since Dec. 1 “had visited or worked in a health care facility before or after their onset of illness;” the World Health Organization says. With 759 Ebola cases, including 705 of them confirmed and 414 confirmed deaths; this has become the second-largest Ebola outbreak in history.