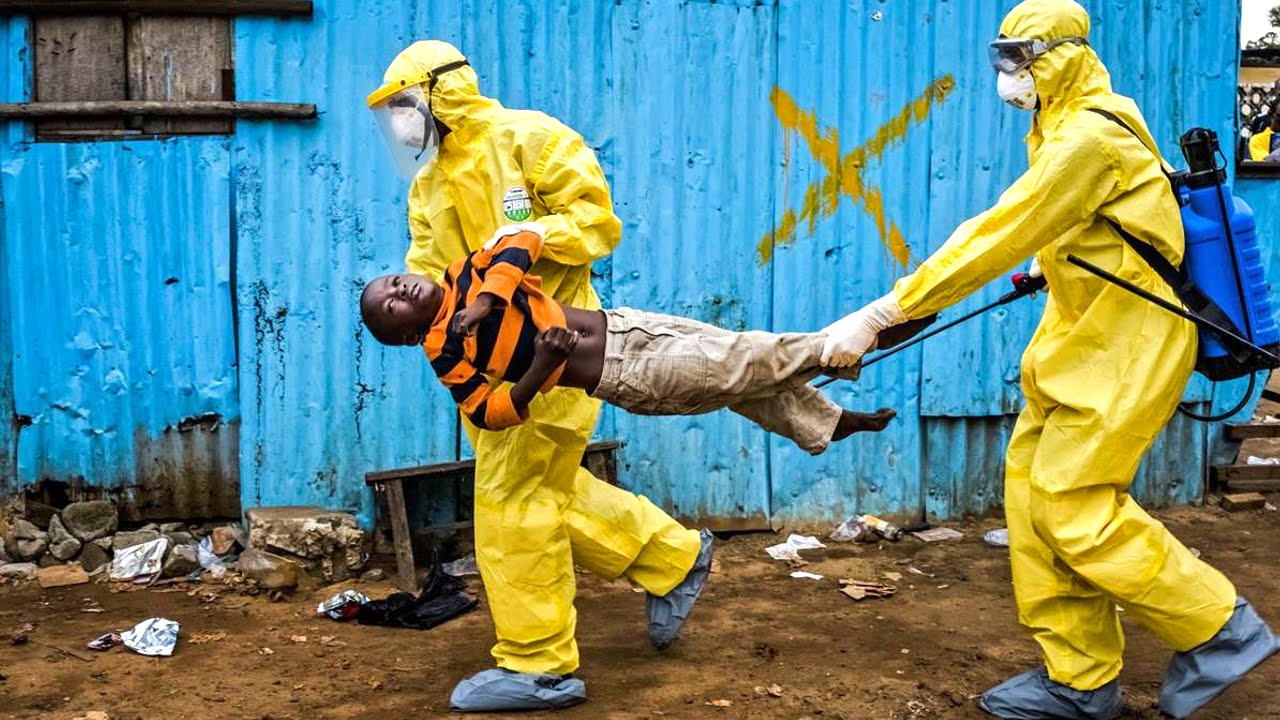 Ebola virus disease (EVD); also known as Ebola hemorrhagic fever (EHF) or simply Ebola; is a viral hemorrhagic fever of humans; and other primates caused by ebola viruses. Signs and symptoms typically start between two days; and three weeks after contracting the virus; with a fever, sore throat, muscular pain, and headaches. Vomiting, diarrhea and rash usually follow; along with decreased function of the liver and kidneys. At this time, some people begin to bleed both internally and externally.

The disease has a high risk of death; killing between 25 and 90% of those infected; with an average of about 50%. This is often due to low blood pressure from fluid loss; and typically follows six to sixteen days after symptoms appear. The virus spreads through direct contact with body fluids; such as blood from infected humans or other animals. Spread may also occur from contact with items recently contaminated with bodily fluids. Spread of the disease through the air between primates, including humans, has not been documented in either laboratory or natural conditions.

Semen or breast milk of a person after recovery from EVD may carry the virus for several weeks to months. Fruit bats are believed to be the normal carrier in nature, able to spread the virus without being affected by it. Other diseases such as malaria, cholera, typhoid fever, meningitis and other viral hemorrhagic fevers may resemble EVD. Blood samples are tested for viral RNA, viral antibodies or for the virus itself to confirm the diagnosis.

This outbreak has become the second-deadliest in history

Congo’s president said he wants to see a deadly Ebola virus outbreak contained in less than three months even as some health experts say it could take twice as long. President Felix Tshisekedi spoke as he visited eastern Congo, where this outbreak has become the second-deadliest in history. Congo’s health ministry says nearly 1,200 cases have; been confirmed, including more than 800 deaths. Tshisekedi’s visit came a few days after the World Health Organization decided; that the outbreak is not yet a global health emergency.

The outbreak is occurring in a volatile area near the border with Rwanda and Uganda where rebel groups and bouts of community resistance have complicated efforts to contain the hemorrhagic fever. As of this week more than 100,000 people have received an experimental but effective Ebola vaccine, a bright spot amid the challenges. Congo’s president vowed more protection for health workers and called on the local population to cooperate with them. This is the first time this region has faced an Ebola outbreak, and many in the population are wary of both outsiders and the government after years of deadly rebel attacks.

If the Ebola outbreak continues “people will be scared to visit the region,” Tshieskedi said. Since taking office early this year he has vowed to combat the region’s rebel groups. One woman who was leaving the Ebola treatment center after recovering from the disease described her mixed feelings once she learned she had the virus. “I thought I would die and I hid, but a few days later I came and got myself admitted,” 29-year-old Kavugho Rachel said. “And here I am, in good health.” She appealed to others in the region to seek help at the centers, too.