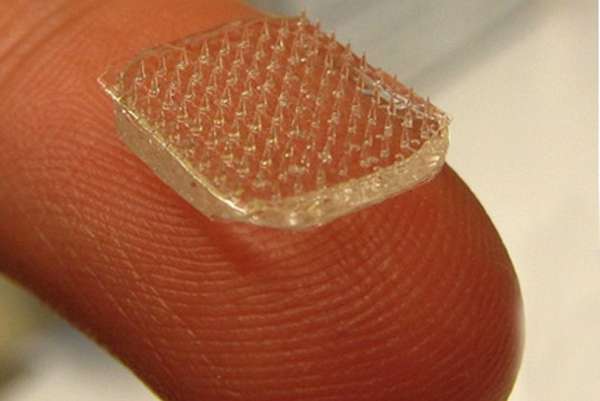 A team of researchers has found that applying a specially designed microneedle patch could benefit damaged heart after a heart attack. In their paper published in the journal Science Advances, the group explains the related mechanics of the patch and how well it worked when tested on animals

During a heart attack, blood often stops flowing to certain parts of the cardiac muscle, leading to cell death and damage to the heart. In most cases, this kind of damage would leave patients with reduced cardiac function. In recent years, scientists have been trying to apply stem cells to damaged heart tissue to heal it-but such research has not progressed well.

In this new effort, the researchers applied an integrated microneedle patch to the damaged area to introduce the paracrine effect by the stromal cells and allow cardiac function protection. The patch works by means of microchannels opened by microneedles, which direct the therapeutic substance secreted by stromal cells to heart cells and promote the communication. The patch is called MN-CSC.

The new technique involves cutting open the chest to gain access to the damaged area in the animal model. Next, a microneedle patch is applied directly to the damage. The chest is then sewn back together and the animal is taken care to recover.

The researchers have tested the patch on rats and pigs. They report that it reduced cell death and also promoted the growth of myocytes and vasculatures, which contributed to cardiac protection.

The researchers note that the patch is biocompatible and works as expected. The next step is, they plan to explore ways to apply a patch that does not involve open heart surgery.