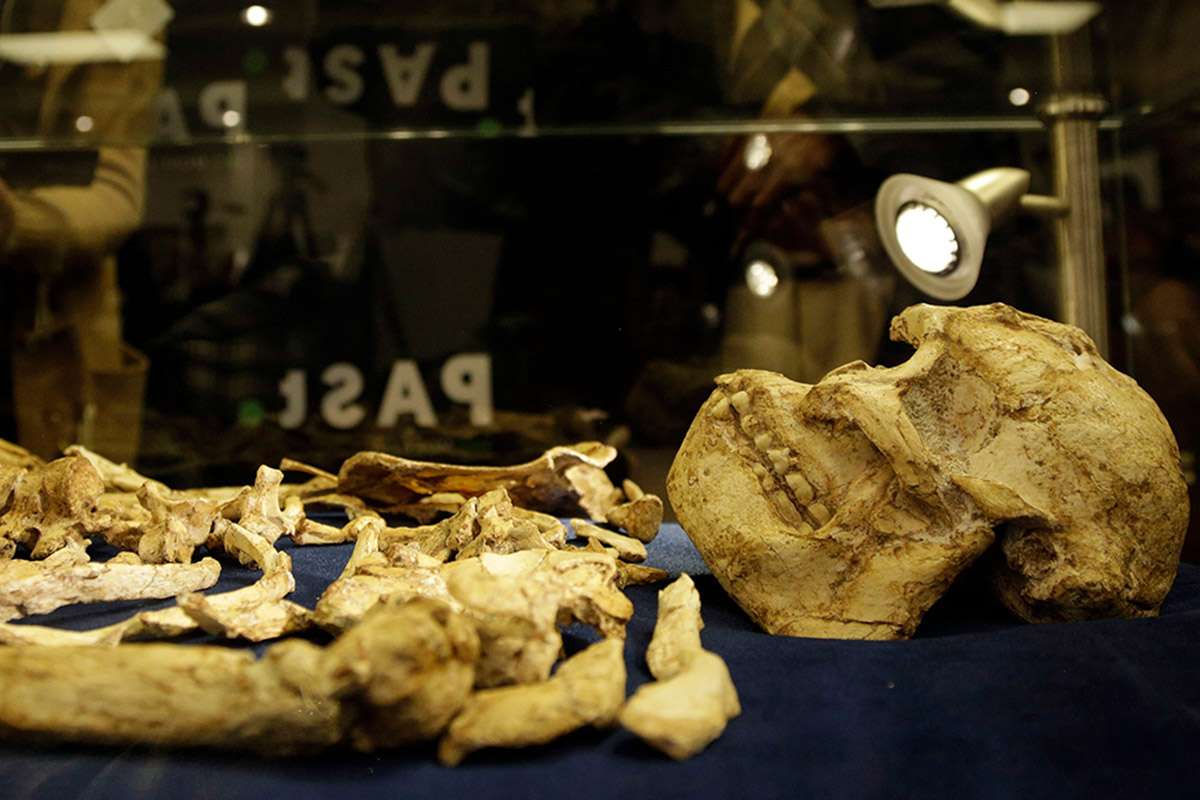 MicroCT scans of the Australopithecus fossil known as Little Foot shows that the brain of this ancient human relative was small and shows features that are similar to our own brain and others that are closer to our ancestor shared with living chimpanzees.

While the brain features structures similar to modern humans – such as an asymmetrical structure and pattern of middle meningeal vessels – some of its critical areas such as an expanded visual cortex and reduced parietal association cortex points to a condition that is distinct from us.

The Australopithecus fossil named Little Foot, an ancient human relative, was excavated over 14 years from the Sterkfontein Caves in South Africa, by Professor Ronald Clarke, from the University of the Witwatersrand (Wits). Its brain endocast was virtually extracted, described and analyzed by Wits researcher, Dr. Amélie Beaudet, and the Sterkfontein team by using MicroCT scans of the fossil.

The scans reveal impressions left on the skull by the brain and the vessels that feed it, along with the shape of the brain. Beaudet's research was released as the first in a series of papers planned for a special issue of this journal on the near-complete "Little Foot" skeleton in the Journal of Human Evolution .

"Our ability to reconstruct early hominin brains has been limited by the very fragmentary nature of the fossil record, The Little Foot is exceptionally well preserved and relatively complete, allowing us to explore our own origins better than ever before," says Beaudet .

The endocast showed that Little Foot's brain was asymmetrical, with a distinct left occipital petalia. Brain asymmetry is essential for lateralization of brain function. Asymmetry occurs in humans and living apes, as well as in other younger hominin endocasts. Little Foot now shows us esta That brain asymmetry was present at a very early date (from 3.67 million years ago), and it supports suggestions That was probably present in the last common ancestor of hominins and other great apes.

Other brain structures , such as an expanded visual cortex, suggests that the brain of Little Foot probably had some features that are closer to the ancestor we share with living chimpanzees.

"In human evolution, when a reduced visual cortex, as we can see in our own brain, is related to a more expanded parietal cortex – which is a critical brain area responsible for several aspects of sensory processing and sensorimotor integration ," says Beaudet. "On the contrary, Little Foot has a large visual cortex, which is more similar to chimpanzees than to humans."

Beaudet and her colleagues compared the Little Foot endocast with endocasts of 10 other South African hominins dating between three and 1.5 million years ago. Their preliminary calculation of Little Foot's endocranial volume was found at the low end of the range for Australopithecus, which is in keeping with its great age and its place among other very early fossils of Australopithecus from East Africa.

The study also has shown that the vascular system in Australopithecus was more complex than previously thought, which raises new questions on the metabolism of the brain at this time. This could be consistent with a previous hypothesis suggesting that the endocranial vascular system in Australopithecus was closer to modern humans than it was in the geologically younger Paranthropus genus.