Super-Resolution Microscopy Visualizes All The Strands Of A DNA 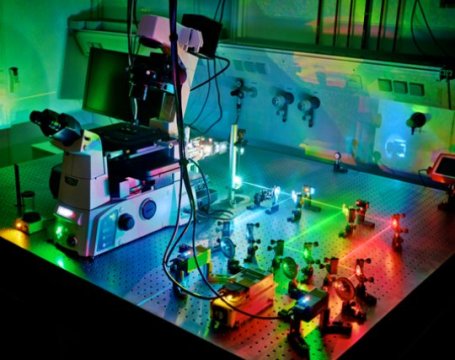 A study examines that researchers have used a new variant of super-resolution microscopy to visualize all the strands of a DNA-based nanostructure for the first time. The method promises to optimize the design of such structures for specific applications. The term 'DNA origami' refers to a method for the design and self-assembly of complex molecular structures with nanometer precision.The study was published in the journal Nature Communications.

The technique exploits the base-pairing interactions between single-stranded DNA molecules of known sequence to generate intricate three-dimensional nanostructures with predefined shapes in arbitrarily large numbers. The method has great potential for a wide range of applications in basic biological and biophysical research. Thus researchers are already using DNA origami to develop functional nanomachines.

Researchers describe a mode of super-resolution microscopy that enables all the strands within these nanostructures to be visualized individually. This has allowed them to conclude that assembly proceeds robustly under a wide range of conditions, but that the probability that a given strand will be efficiently incorporated is dependent on the precise position of its target sequence in the growing structure.

DNA origami structures are essentially assembled by allowing one long single-stranded DNA molecule (the 'scaffold' strand) to interact in a controlled, predefined manner with a set of shorter 'staple' strands. The latter bind to specific ('complementary') stretches of the scaffold strand, progressively folding it into the desired form. "In our case, the DNA strands self-assemble into a flat rectangular structure, which serves as the basic building block for many DNA origami-based studies at the moment," says Maximilian Strauss.

With the aid of a super-resolution technique called DNA-PAINT, the researchers can visualize nanostructures with unprecedented spatial resolution, allowing them to image each of the strands in the nanostructures. "So we can now directly visualize all components of the origami structure and determine how well it put itself together," says Strauss. As its name suggests, the DNA-PAINT technique itself also makes use of the specificity of DNA-DNA interactions.

"By comparing the information in the individual fluorescence images, we can attain a higher resolution, so that we can inspect the whole structure in detail," Strauss says. "This phenomenon can be understood as follows. Let's say we're looking at a house with two illuminated windows. Seen from a certain distance, it appears as if the light is coming from one source.

The DNA-PAINT method thus provides a means of optimizing the construction of DNA nanostructures. Also, the authors believe that the technology has great potential in the field of quantitative structural biology, as it will allow researchers to measure important parameters such as the labelling efficiency of antibodies, cellular proteins and nucleic acids directly.

Hence, the method allows the researchers to determine the positions of the bound staple strands precisely, and the specific blinking signal emitted by imager strands reveals sites that are available for binding. The results obtained with the DNA-PAINT method revealed that variations in several physical parameters, such as the overall speed of structure formation have little influence on the overall quality of the assembly process.