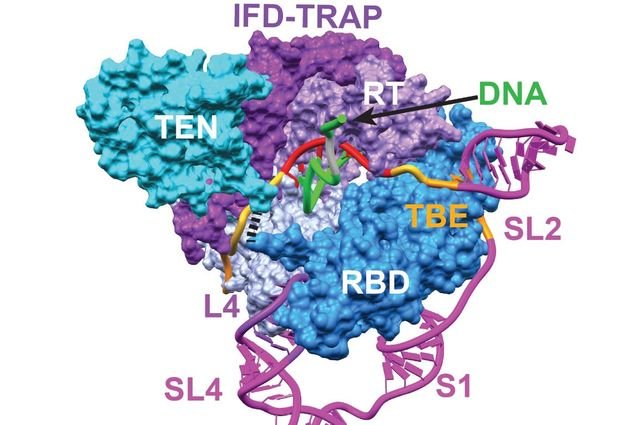 Researchers observed the structures of TEN and TRAP, and how they interact with each other and with the telomerase RNA. Many mutations that scientists attributed to the TEN region, in fact, disrupt TEN's interaction with TRAP. The study was published in Cell.

Cancer, aging-related diseases, and other illnesses are closely tied to an important enzyme called "telomerase," whose catalytic core where most of its activity occurs can now be seen in near atomic resolution. At each step, they zoom in closer and see more and more details, and can now begin to deduce not just what the enzyme looks like, but also how it functions. Knowing that may lead to the development of new drugs that target specific parts of the enzyme.

In addition to reporting the highest level of detail ever seen of the structure of telomerase's catalytic core, shown in the animation below, the researchers report for the first time they have captured telomerase in the process of making DNA.

Cells with abnormally active telomerase can continually rebuild their protective chromosomal caps and will not die. Over time, this is harmful because DNA errors accumulate and damage cells. Telomerase is especially active in cancer cells, which enables cancer to grow and spread.

TRAP plays a crucial role in adding small pieces of DNA to the ends of chromosomes to keep them from shortening every time cells divide. The researchers report for the first time the structure, shape and significance of TRAP, and the region with which it interacts. This is the first time researchers have seen telomerase in the process of making DNA. The researchers captured telomerase immediately after it added a nucleotide to a growing DNA chain in the catalytic core.

The scientists used a technique called "cryo-electron microscopy" that enables them to see the enzyme in extraordinary detail and used computational modeling to interpret their data. The research team has expertise in several fields, including biochemistry, molecular biology, computational biology, and biophysics.