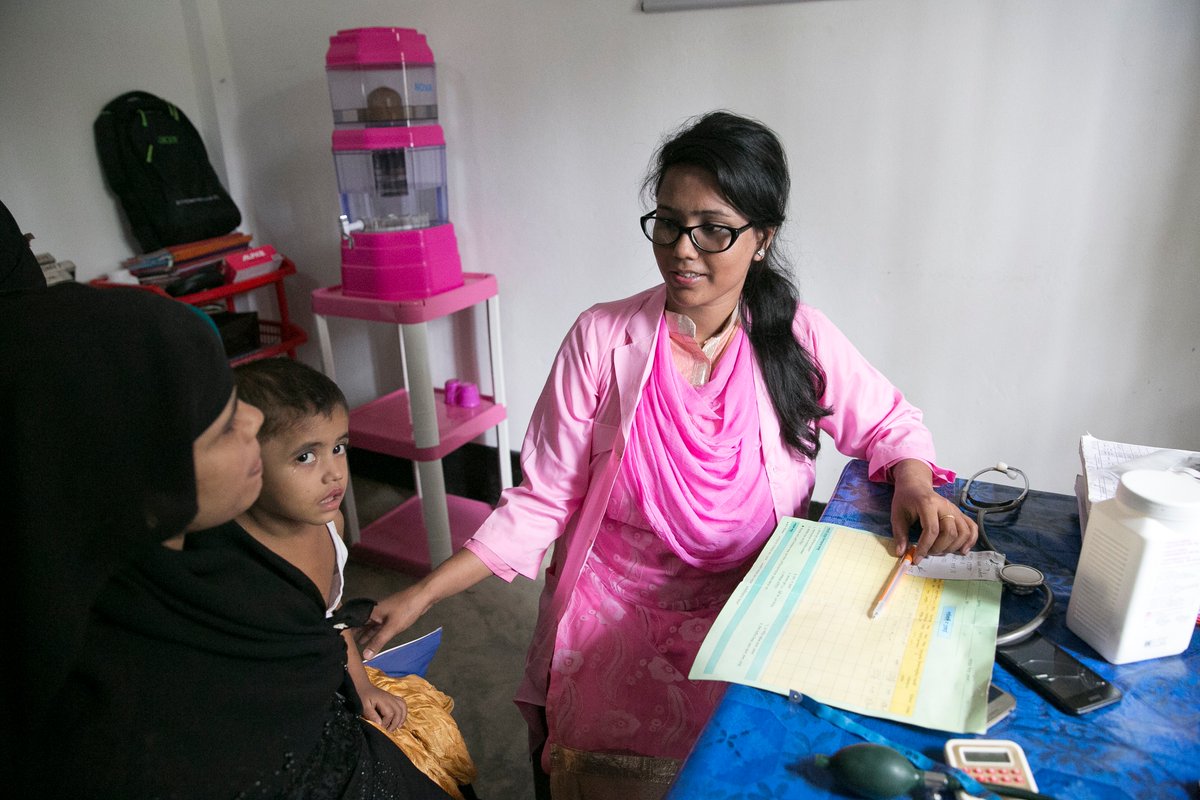 The maternity centre in Nayapara Refugee camp was crowded with women and children when an older woman burst into the facility with her pregnant daughter. Salima Khatum, 20, was in labor with her second child, and very close to giving birth.

Rondi Anderson, a UNFPA midwifery specialist, swung into action along with a team of paramedics and midwives. Ms. Khatum was cradled in her mother’s arms as the health workers gathered around, taking vital signs and listening to the fetal heartbeat.

Midwives have been deployed in the Rohingya refugee camps and host communities – and other areas of Bangladesh with major needs – through a UNFPA-supported midwifery diploma programme implemented by the government.

“There’s a clear nexus here between the increasing capacity to ensure safer pregnancy and childbirth for the most vulnerable women in Bangladesh itself and the ability to respond better to humanitarian needs, as with the Rohingya situation,” Ms. Anderson explained. “Midwives save lives, it’s that simple.” Terror and trauma

Afroza Banu was among the first midwives to graduate from the diploma programme in 2015. She was deployed to Cox’s Bazar after extreme violence erupted in Myanmar’s Rakhine state last year, triggering a mass influx of refugees into Bangladesh.

The challenges she faced were immense.

She was initially unable to communicate with the refugee women. And language was not the only barrier they faced – taboos about women venturing out alone and conservative attitudes around sexual health also made it harder for them to access reproductive health information and services.

“So many of them are traumatized with what happened to them,” Ms. Afroza Banu said. “They suffered sexual assault, grievous injuries. Many of them swam across the Naf River to reach Bangladesh. They were starving and dehydrated when they arrived, including many pregnant women.”

Gradually, Ms. Afroza Banu learned to speak Chittagonian, the local language in Cox’s Bazar, which is similar to Rohingya. She worked hard to build trust and develop a bond with the Nayapara community. Presently, she is one of seven midwives working at the UNFPA-supported Nayapara maternity centre, and she feels confident she is making a difference.

Learning their rights and choices

Demand for reproductive health services is enormous. According to the joint humanitarian response plan, there are an estimated 60,000 pregnant Rohingya women in the refugee and host communities.

“By the time they are 15 to 18 years old, many already have children, sometimes several. We counsel them about family planning and provide them a variety of options for contraception,” she said.

Many refugees learn, for the first time, that family planning can help preserve the health of adolescents and post-partum mothers – who may be highly vulnerable to pregnancy complications. “Many are now starting to understand the importance of birth spacing,” Ms. Akter said.

A whiteboard in Akter’s office shows the increasing demand for family planning services, both among long-time Rohingya camp residents as well as among new arrivals.

In addition to supporting the Nayapara maternity centre, UNFPA is also supporting sexual and reproductive health services at 19 other facilities within and around the camp. This includes providing health supplies and equipment as well as training and other support.

Ms. Khatum was well aware of the services available. She had her first child three and a half years ago, and used family planning until her most recent pregnancy. In the throes of labour, she also knew where to find high-quality delivery services.

Two hours after arriving at the Nayapara maternity centre, Ms. Khatum gave birth to a healthy baby girl. Afterward, as she recovered, she requested a contraceptive implant – she says two children is enough. She and the midwives were all elated the delivery had gone so smoothly.

“For me, when I help deliver a baby, it’s such a pleasure,” Ms. Afroza Banu said. “I will eventually return to my home district at some point, but the experience I’ve had here in Nayapara, helping the Rohingya refugees, I will always carry that with me.”