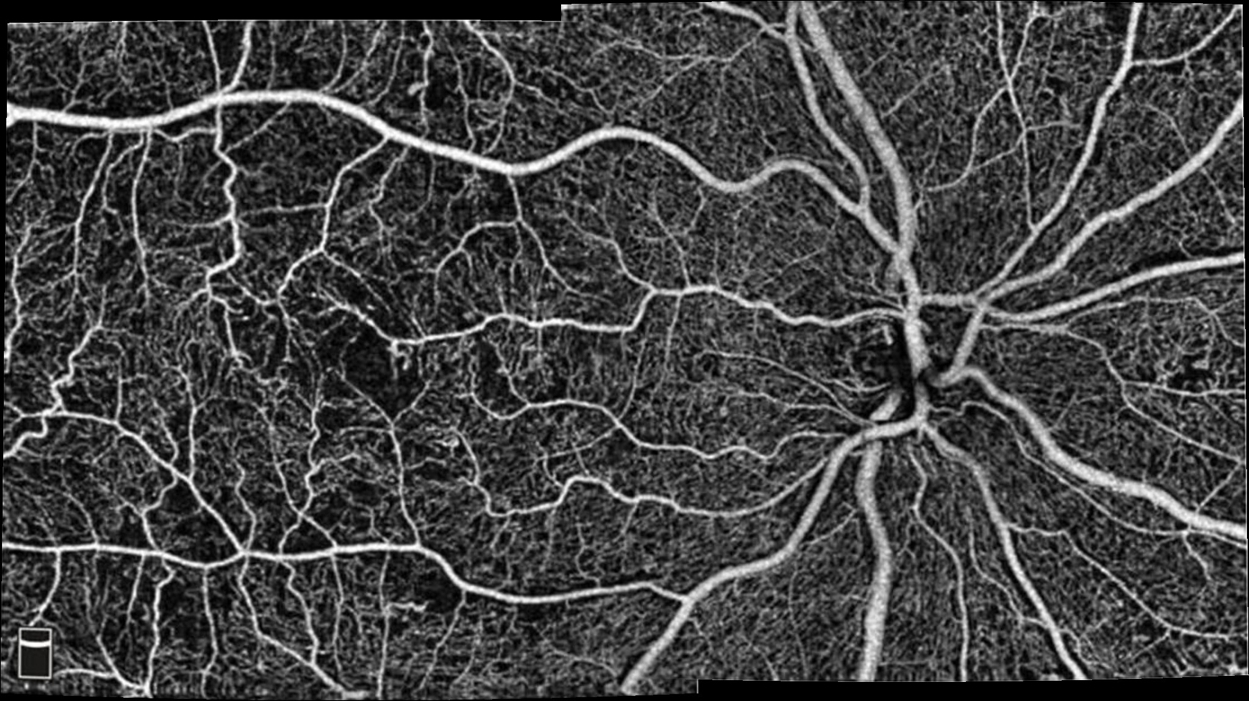 The technology detected a significantly larger foveal avascular zone among 14 participants with biomarker-positive positron emission tomography (PET) imaging compared with 16 other people without this preclinical sign of Alzheimer's (0.30 mm2 vs. 0.40 mm2; P = .002).

"Changes in the visual system and the eye itself can parallel changes in the brain, and are more easily detected with some of the tools we use every day in clinic," Van Stavern told Medscape Medical News.

The researchers arrived at a similar finding by examining cerebrospinal fluid biomarkers associated with Alzheimer's disease. For example, the inner foveal thickness was thinner among the cerebrospinal fluid  (CSF) biomarker-positive patients (75.4 μm vs. 66 μm; P = .278) compared with the others.

It is now possible to identify the pathology of Alzheimer's disease by using biomarkers on PET imaging with Pittsburgh compound B or florbetapir radiotracers, Van Stavern said. An amyloid β-42 peptide or tau protein levels can also indicate Alzheimer's disease.

OCT angiography is OCT with super-high-speed scanning. "Essentially what this does is separate out objects in the retina that are stationary from objects in motion. It separates out blood cells and produces these nice vascular maps of the retina and the optic nerve" without the use of dye, he said.

Previous research associates microvascular changes in the eyes, especially a loss of ganglion cells and axons in the retina, with risk for Alzheimer's disease and among people with established disease. Retinal thinning on OCT was associated with cognitive decline in one study, for example, and fundus photography offered another window into these structural eye changes in another.

The 30 participants in this case-controlled, single-center study underwent PET amyloid imaging or CSF analysis. The healthy volunteers had no cognitive dysfunction at baseline, based on a 0 score on the Clinical Dementia Ratio Scale. The investigators controlled for patient age and intraocular pressure in their analysis.

The evidence is not yet sufficient to permit recommendation of OCT angiography for routine Alzheimer's disease screening in a clinical setting, he said. "We need more data over a longer timeframe. However, our early results suggest that this might be possible down the line."

"Honestly, this is really where the field is headed — to identify people in the preclinical stage before there is too much neuronal and axonal loss," he said.

In the future, Van Stavern would like to do a longitudinal analysis to expand on the current findings. He plans to continue recruiting cognitively healthy individuals, as well as people with early and advanced Alzheimer's disease.

"These findings are interesting and potentially valuable in early detection of the AD, and in noninvasively adding certainty to the diagnosis," he added. "Potential confounders, such as age, coexisting diseases, and presence of maculopathies, will need to be considered in the development and interpretation of this work."