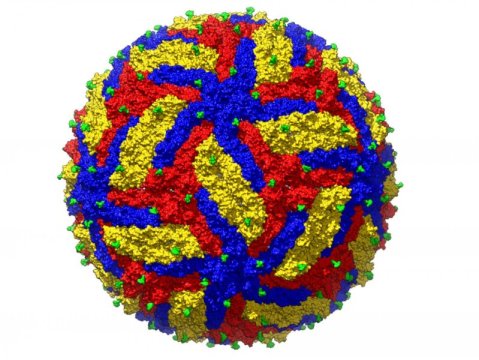 They used the latest electron microscopy techniques to see the atomic details of the Zika virus structure. They report here the refined structure of the mature ZIKV at a resolution of 3.1 Å as determined by cryo-electron microscopic single-particle reconstruction. The improvement in the resolution, compared with previous enveloped virus structures, was the result of optimized virus preparation methods and data processing techniques.

Zika virus (ZIKV) is a member of the Flaviviridae family, which consists of arthropod-borne, lipid-enveloped, positive, single-stranded RNA viruses. There are 52 recorded species in the flavivirus genus, many of which cause widespread morbidity and mortality of humans.

The glycoprotein interactions and surface properties of ZIKV were compared with other mosquito-borne flavivirus structures. The largest structural differences and sequence variations occur at the glycosylation loop associated with receptor binding. Probable drug binding pockets were identified on the viral surface.

They took advantage of Zika virus stability compared to its flavivirus cousins, such as dengue virus, Japanese encephalitis virus, and yellow fever virus, allowing for a particularly accurate three-dimensional atomic model. With the higher resolution, it is now possible to efficiently design vaccines and engineer anti-viral compounds that inhibit the virus.

Detailed studies of interactions between the E and M proteins at the 2-fold, 3-fold, and 5-fold axes identified stabilizing interactions in ZIKV that are missing in DENV and JEV and, therefore, provide a starting point for mutational analyses.