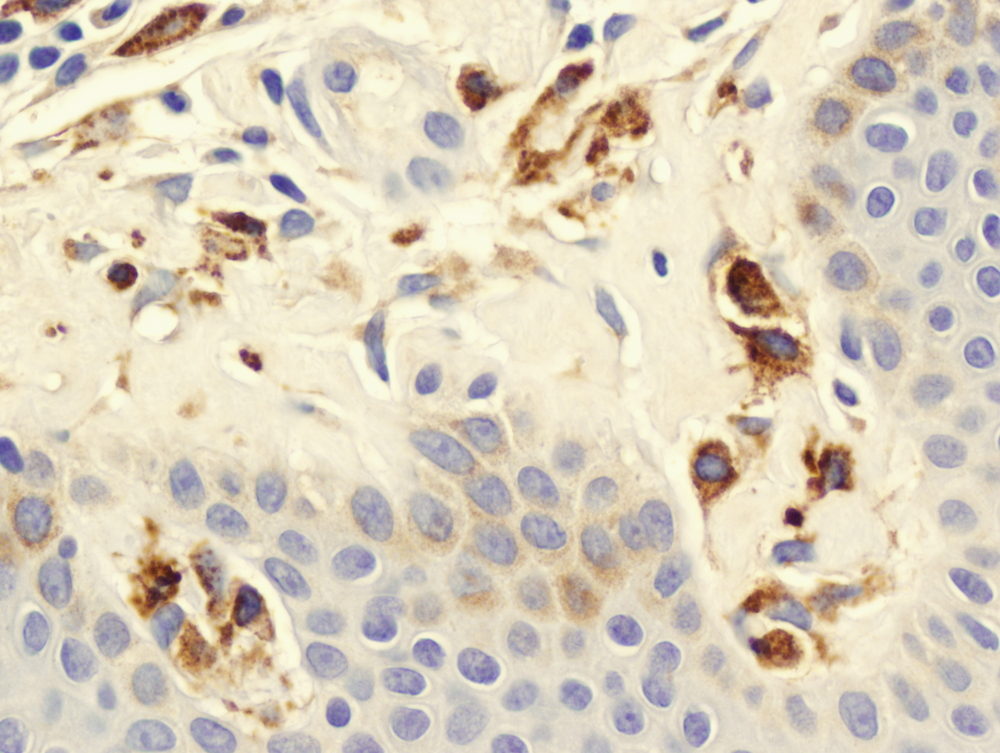 Researchers have presented the clinical data with a novel agent, avapritinib (BLU-285, Blueprint Medicines), which targets a specific mutation found in 90% of cases of mastocytosis, at the American Society of Hematology (ASH) Annual Meeting. The results show impressive activity, with disease control seen in all patients, and improvements in clinical symptoms seen quickly.

There are an estimated 2000 mastocytosis cases per year in the U.S., but this is an underestimate, as the disease is often unrecognized, and is certainly underdiagnosed. At present, the most common way to see patients with mastocytosis is from referrals by dermatologists, who find these patients when they present with skin lesions, or from referrals by allergists/immunologists, who see patients with recurring severe anaphylactic reactions. Both of these are presenting symptoms of an underlying disorder in which mast cells are proliferating at the pathological rate.

In a normal bone marrow, mast cells will account for only one or two cells in 1000, but in a patient with mastocytosis, some 10% of the bone marrow, and sometimes as much as 50%, is filled with mast cells. This growing mass of mast cells distorts body organs, causing swelling of the spleen and leaving little room for the stomach, which can cause problems with eating, or the mast cells accumulate in the small intestine and colon and lead to malnutrition and weight loss. Other symptoms include disruption of liver function and low blood counts, and in some cases, the mast cells become malignant and transform into mast cell leukemia.

In the last year, midostaurin was approved by the US FDA for systemic mastocytosis, as well as for use in acute myeloid leukemia, has shown clinical efficacy in a phase 2 trial. Midostaurin is a multitargeted kinase inhibitor, and it achieved a complete response plus partial response rate of 17%. The preliminary results now reported for the new therapy avapritinib look much better, although they come from a small phase 1 study that was not designed to assess efficacy. In that study, among the 18 evaluable patients with aggressive systemic mastocytosis, 72% had an overall response and 100% had disease control. In addition, the complete response and partial response rate was 56%.

Most patients showed a rapid improvement in clinical symptoms. The reductions in mast cell burden and D816V mutant allele fraction were durable. Importantly, marked reductions in mast cell burden were noted in 2 patients with mast cell leukemia who had progressed on midostaurin, and also in 2 patients with advanced systemic mastocytosis who were intolerant to midostaurin. These results come from a phase 1 dose-escalation study, which concluded that the dose to be used clinically is 300 mg daily. This dose will now be tested in a larger number of patients in a phase 2 trial. Most patients showed an improvement in clinical symptoms that was both rapid and striking.

In conclusion, Avapritinib BLU-285 was designed specifically designed to target the KIT D816V mutation, which is found in 90% of mastocytosis. The drug shows marked clinical efficacy, and it also targets a known defect.