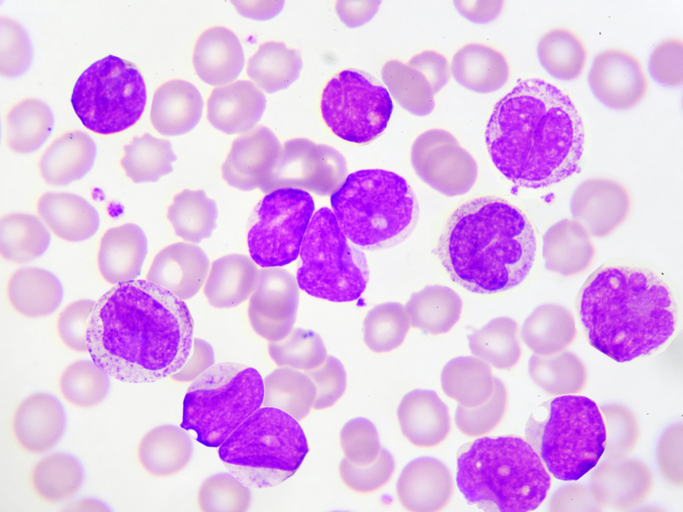 Acute myeloid leukaemia is the most common type of acute cancer of the blood and bone marrow in adults. AML progresses quickly and only 26% of the patients survive longer than five years as resistance against established treatments develops.

The most common molecular cause is FLT3 mutations, which result in hyper-activation of STAT5. A research consortium now reports on an early preclinical effort targeting STAT5 that integrates well with existing therapies.

The term "hematopoietic cancer" refers to health conditions in which the process of blood cell production is altered. Cancers of white blood cells are characterized by enhanced proliferation and reduced differentiation and cell death in one myeloid lineage, which can promote the outgrowth of a dominant myeloid cell type.

The transformation to AML is the most devastating complication experienced by patients. This type of cancer usually progresses quickly and despite considerable advances in therapeutic approaches and allogeneic hematopoietic stem cell transplantation, only 26% of patients survive longer than five years.

These conditions are frequently caused by mutations that over-activate intracellular signaling or gene transcription. Activating mutations in the receptor FLT3 represent 30% of driver mutations in AML, which in turn activates STAT5, an important transcription factor for blood cell transformation.

The leading strategy for combating such cancer is targeting the mutated proteins with small molecular weight drugs. However, while FLT3 inhibitors initially induce responses in AML patients with FLT3 mutations, these responses are not durable, and AML progresses in virtually all patients. New treatment strategies are therefore urgently needed to improve patient survival of this aggressive disease.

Transcription factors like STAT5 are similar to genetic light switches and capable of turning genes on and off. But previous strategies to target STAT transcription factors have been difficult and failed in potency or a lack of specificity. An international consortium of researchers from Austria, Canada and Hungary now report on a novel compound which targets STAT5 directly and selectively.

Researchers chose to target the SH2 domain of STAT5, which is essential for the interactions between STAT5 proteins and their subsequent activity.

The researchers aimed at development, synthesis and preclinical testing of a new compound that targets the oncogenic functions of STAT5 proteins. Upon state-of-the-art computational molecular modeling, the compound was synthesized and subjected to a broad array of tests.

In the study now reported in the journal Leukemia, the compound not only binds directly to STAT5, it subsequently disrupts STAT5 activation, nuclear translocation, and STAT5-dependent gene transcription.

Bettina Wingelhofer, first author of the publication, used the compound in several leukemic cells, and says, "We could show that our novel compound might be a good drug candidate as it impaired the proliferation of patient-derived AML cell lines at low concentrations."

Further research in cooperation with a pharmaceutical company will be required to validate this new compound class with further improvements to validate if it is indeed suitable to be used in a clinical trial.