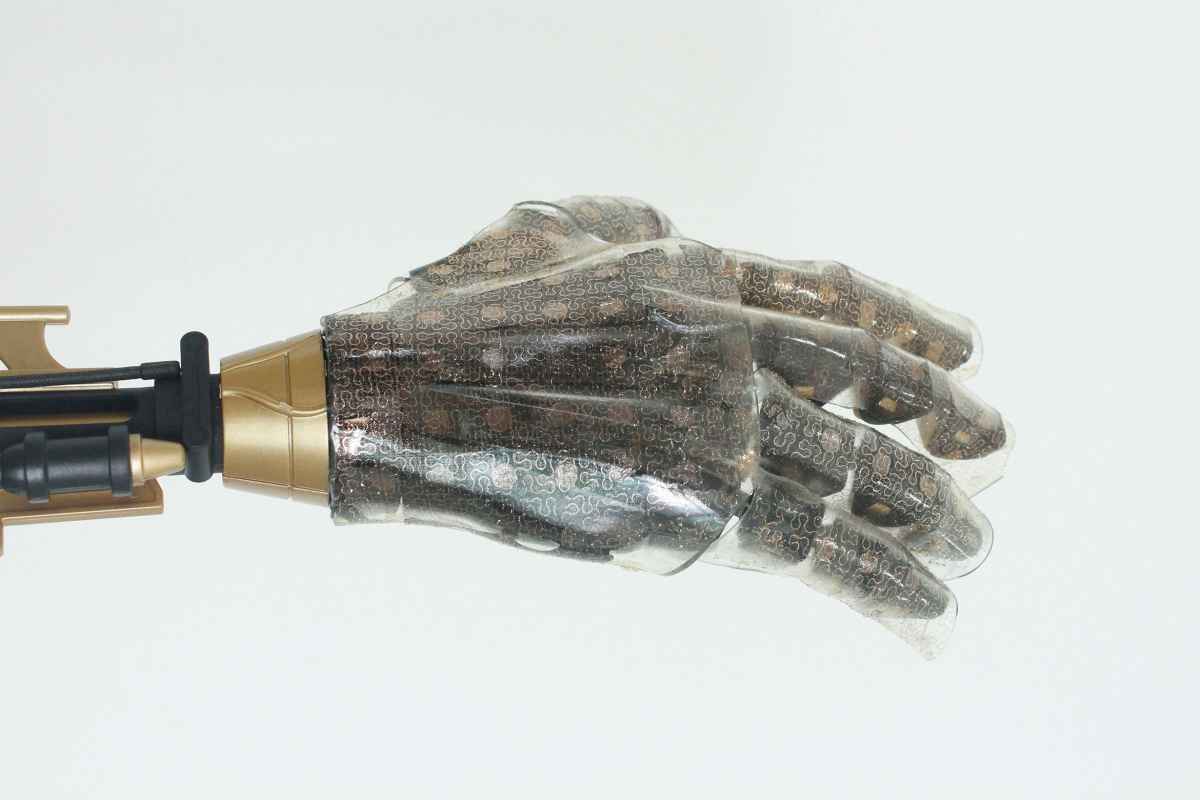 Amputees often experience the sensation of a "phantom limb" — a feeling that a missing body part is still there. That sensory illusion is closer to becoming a reality thanks to a team of engineers at the Johns Hopkins University that has created an electronic skin. When layered on top of prosthetic hands, this e-dermis brings back a real sense of touch through the fingertips.

"After many years, I felt my hand, as if a hollow shell got filled with life again," says the anonymous amputee who served as the team's principal volunteer tester. Made of fabric and rubber laced with sensors to mimic nerve endings, e-dermis recreates a sense of touch as well as pain by sensing stimuli and relaying the impulses back to the peripheral nerves.

"We have made a sensor that goes over the fingertips of a prosthetic hand and acts like your own skin would," says Luke Osborn, a graduate student in biomedical engineering. "It's inspired by what is happening in human biology, with receptors for both touch and pain.

The work — published in the journal Science Robotics – shows it is possible to restore a range of natural, touch-based feelings to amputees who use prosthetic limbs. The ability to detect pain could be useful, for instance, not only in prosthetic hands but also in lower limb prostheses, alerting the user to potential damage to the device.

"Pain is, of course, unpleasant, but it's also an essential, protective sense of touch that is lacking in the prostheses that are currently available to amputees," he says. "Advances in prosthesis designs and control mechanisms can aid an amputee's ability to regain lost function, but they often lack meaningful, tactile feedback or perception."

That is where the e-dermis comes in, conveying information to the amputee by stimulating peripheral nerves in the arm, making the so-called phantom limb come to life. The e-dermis device does this by electrically stimulating the amputee's nerves in a non-invasive way, through the skin, says the paper's senior author, Nitish Thakor.

"For the first time, a prosthesis can provide a range of perceptions, from fine touch to noxious to an amputee, making it more like a human hand," says Thakor, co-founder of Infinite Biomedical Technologies.

The team created a "neuromorphic model" mimicking the touch and pain receptors of the human nervous system, allowing the e-dermis to electronically encode sensations just as the receptors in the skin would. Tracking brain activity via EEG, the team determined that the test subject was able to perceive these sensations in his phantom hand.

The researchers then connected the e-dermis output to the volunteer by using a noninvasive method known as transcutaneous electrical nerve stimulation, or TENS. In a pain-detection task, the team determined that the test subject and the prosthesis were able to experience a natural, reflexive reaction to both pains while touching a pointed object and non-pain when touching a round object.

The e-dermis is not sensitive to temperature — for this study, the team focused on detecting object curvature (for touch and shape perception) and sharpness (for pain perception). The e-dermis technology could be used to make robotic systems more human, and it could also be used to expand or extend to astronaut gloves and space suits, Osborn says.

The researchers plan to further develop the technology and better understand how to provide meaningful sensory information to amputees in the hopes of making the system ready for widespread patient use.

The e-dermis was tested over the course of one year on an amputee who volunteered in the Neuroengineering Laboratory at Johns Hopkins. The subject frequently repeated the testing to demonstrate consistent sensory perceptions via the e-dermis. The team has worked with four other amputee volunteers in other experiments to provide sensory feedback.