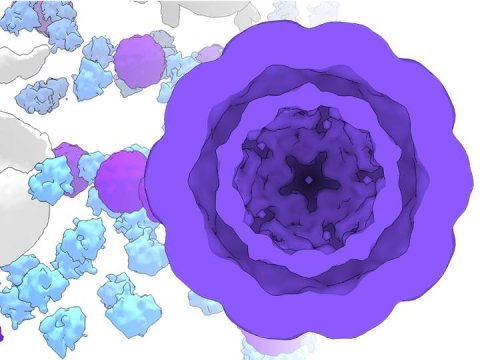 Researchers have altered mammalian cells in such a way that they formed artificial compartments in which sequestered reactions could take place, allowing the detection of cells deep in the tissue and also their manipulation with magnetic fields.

Research team accomplished this by introducing into human cells the genetic information for producing bacterial proteins, so-called encapsulins, which self-assemble into nanospheres. This method enabled the researchers to create small, self-contained spaces with artificial cellular compartments inside mammalian cells.

The great strength of the little spheres is that they are non-toxic to the cell and enzymatic reactions can take place inside them without disturbing the cell's metabolic processes. "One of the system's crucial advantages is that they can genetically control which proteins, for example, fluorescent proteins or enzymes, are encapsulated in the interior of the nanospheres. They can thus spatially separate processes and give the cells new properties.

But the nanospheres also have a natural property that is especially important to Westmeyer's team: They can take in iron atoms and process them in such a way that they remain inside the nanospheres without disrupting the cell's processes. This sequestered iron biomineralization makes the particles and also the cells magnetic. To render cells visible and controllable remotely by making them magnetic is one of our long-term research goals.

In particular, this will make it easier to observe cells using different imaging methods: Magnetic cells can also be observed in deep layers with methods that do not damage the tissue, such as Magnetic Resonance Imaging (MRI). Researcher team could additionally show that the nanospheres are also visible in high-resolution cryo-electron microscopy.

This feature makes them useful as gene reporters that can directly mark the cell identity or cell status in electron microscopy, similar to the commonly used fluorescent proteins in light microscopy. Moreover, there are even additional advantages: Cells that are magnetic can be systematically guided with the help of magnetic fields, allowing them to be sorted and separated from other cells.

Use in cell therapy conceivable

One possible future use of the artificial cellular compartments is, for example, cell immunotherapies, where immune cells are genetically modified in such a way that they can selectively destroy a patient's cancer cells. With the new nano-compartments inside the manipulated cells, the cells could in the future be possibly located easier via non-invasive imaging methods.

Using the modularly equipped nano-compartments, they might also be able to give the genetically modified cells new metabolic pathways to make them more efficient and robust. There are of course many obstacles that have to be overcome in preclinical models first, but the ability to genetically control modular reaction vessels in mammalian cells could be very helpful for these approaches.