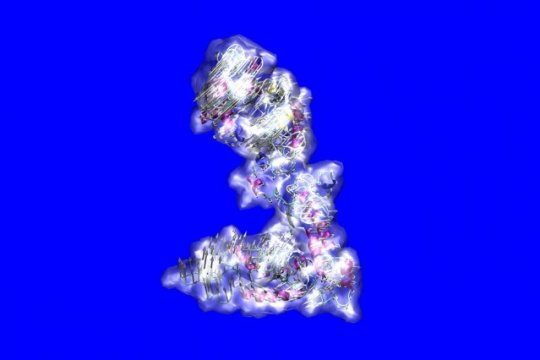 A study shows that the stretchiness that allows living tissues to expand, contract, stretch, and bend throughout a lifetime is the result of a protein molecule called tropoelastin. Remarkably, this molecule can be stretched to eight times its length and always returns back to its original size.

Researchers have decoded the molecular structure of this complex molecule, as well as the details of what can go wrong with its structure in various genetically driven diseases. Tropoelastin is the precursor molecule of elastin, which along with structures called microfibrils is the key to the flexibility of tissues including skin, lungs, and blood vessels.

But the molecule is complex, made up of 698 amino acids in sequence and filled with disordered regions, so unraveling its structure has been a major challenge for science. That challenge has been solved by a team of researchers who used a combination of molecular modeling and experimental observation to build an atom-by-atom picture of the molecule's structure.

The structure of tropoelastin has been elusive; Traditional characterization methods are insufficient for decoding this molecule because it's very large, disordered, and dynamic. But the combination of computer modeling and experimental observations this team used allowed us to predict a fully atomistic structure of the molecule.

Dynamic responses, which could ultimately help in the design of treatments for these conditions. Other "artificial" mutations induced by the researchers, that do not correspond to any known naturally occurring mutations, can be used to understand better the function of the specific part of the gene affected by that mutation.

They are interested in probing a particular region of the molecule to understand the function of that region. In addition to imparting elasticity, the molecule plays a key role in cell signaling and cell adhesion, affecting cellular processes which are driven by interactions with specific sequences within the molecule.

The study also looked at the specific changes in the tropoelastin molecule caused by mutations that are associated with known diseases, such as cutis laxa, in which the skin lacks elasticity and hangs loosely.

Understanding the structure of this molecule is not only important in the context of disease, but can also enable us to translate the knowledge from this biomaterial to synthetic polymers, which can be designed to meet certain engineering needs. Engineering the balance of order and disorder in the context of desired properties could open doors to new designer materials.