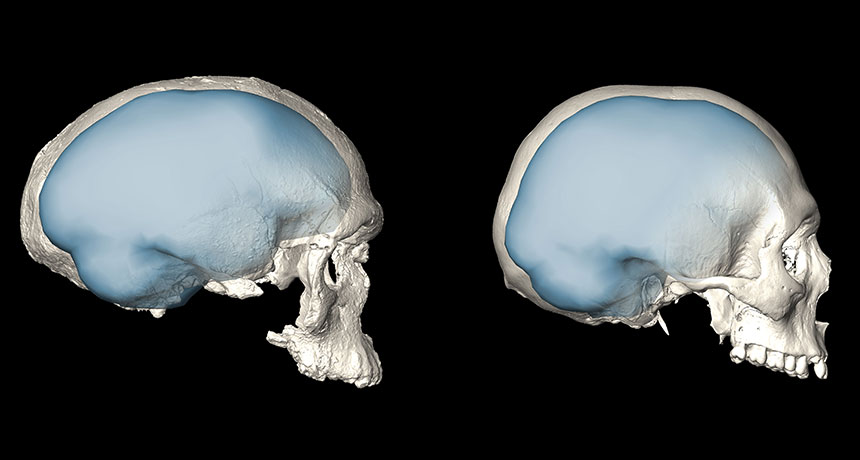 Researchers found that big brains outpaced well-rounded brains in human evolution. Around the time of the origins of our species 300,000 years ago, the brains of Homo sapiens had about the same relatively large size as they do today. But rounder noggins rising well above the forehead considered a hallmark of human anatomy did not appear until between about 100,000 and 35,000 years ago. The study was published in Science Advances.

Using CT scans of ancient and modern human skulls, the researchers created digital brain reconstructions, based on the shape of the inner surface of each skull’s braincase. Human brains gradually evolved from a relatively flatter and elongated shape more like that of Neandertals’ to a globe shape thanks to a series of genetic tweaks to brain development early in life.

A gradual transition to round brains may have stimulated considerable neural reorganization by around 50,000 years ago. That cognitive reworking could have enabled a blossoming of artwork and other forms of symbolic behavior among Stone Age humans, the team suspects. Other researchers have argued, however, that abstract and symbolic thinking flourished even before H. sapiens emerged (SN: 12/27/14, p. 6).

Ancient DNA studies indicate that genes involved in brain development changed in H. sapiens following a split from Neandertals more than 600,000 years ago (SN Online: 3/14/16). Those genetic changes might be responsible for differences in neural wiring and brain growth that led to the brain [rounding] in modern humans, but not in Neandertals.