An Achilles heel of Trypanosomes discovered 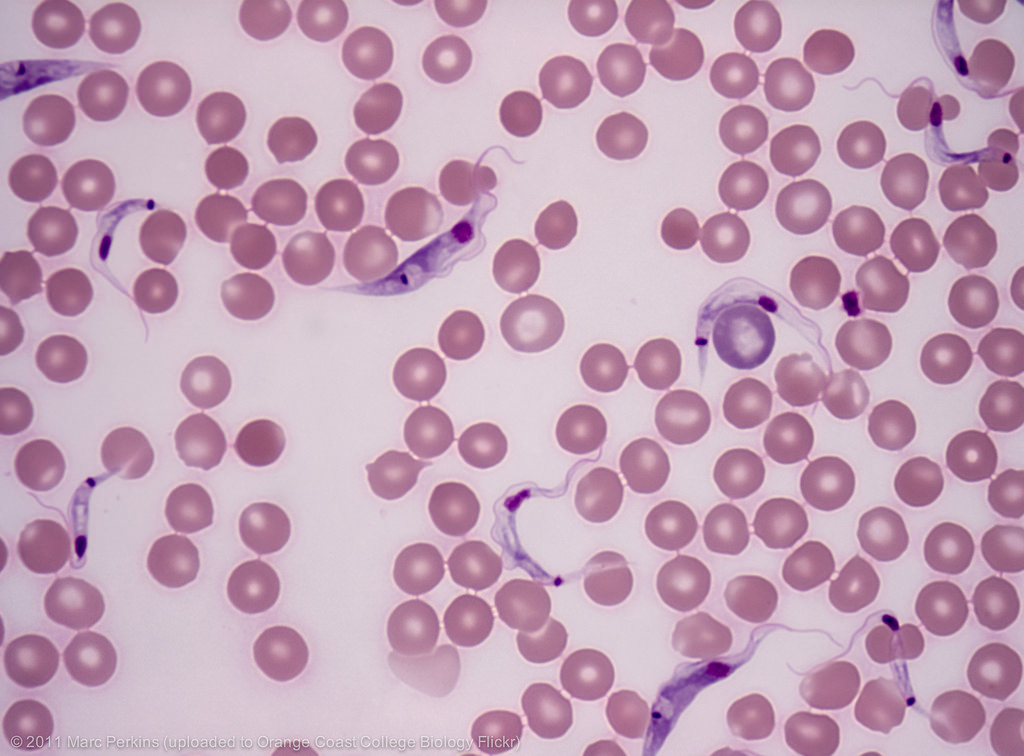 Trypanosomes are single-celled parasites that cause diseases such as human African sleeping sickness and Nagana in animals. But they are also used in basic research as a model system to study fundamental biological questions.

Researchers of the University of Bern have now investigated how trypanosomes equally distribute their "power plant" to the daughter cells during cell division. The discovered mechanism potentially opens new avenues for drug interventions.

Trypanosomes can cause devastating diseases in people: the sleeping sickness in Africa, Chagas disease in South America and recently also in Europe. They can also affect animals, and cause Nagana in cattle in Africa. There are still no suitable therapies for these diseases.

Researchers led by Prof. Torsten Ochsenreiter of the Institute of Cell Biology at the University of Bern have studied the mitochondria, the "power plants" of single-cell trypanosomes, and have now discovered that these behave differently from cell power plants in humans during cell division. The findings could also help to develop new medicines against the diseases caused by the parasites.

Mitochondria are small separate units in the cell, which also act as power plants and provide the organism with energy. Mitochondria were originally independent bacteria which were incorporated by a cell around 1.5 billion years ago.

During their coexistence, the bacterium was further and further integrated as a power plant into the cell, which was evident in the fact that the construction plans of the power plant were increasingly transferred into the host cell from the bacterial genome.

Today, almost the entire structure of the mitochondria is stored in the genome of the host cell. "Almost entirely – because the mitochondria have still retained a little autonomy", Anneliese Hoffmann from the Institute of Cell Biology of the University of Bern, lead author of the study, explains.

"They still have some essential components of the power plant in their own genome". If a cell splits today, not only does it have to ensure to duplicate its own genome and distribute it equally among the daughter cells, but also that the mitochondrial genome is passed on accordingly.

The structures and mechanisms necessary for this were largely uncharacterized until now. Three research groups from the University of Bern in collaboration with the Oxford Brookes University (UK) have now decoded parts of the mechanism. They use a revolutionary high-resolution technology for this, the so-called "stimulated emission depletion (STED) microscopy".

Trypanosomes are well suited as a model system in life sciences, as they have only one very large mitochondrion with only a single giant genome. Human cells usually have over hundreds to thousands of mitochondria, each with several genomes.

This very simple mitochondrial setup in trypanosomes is similar to the situation 1.5 billion years ago, and allows to analyse the development of cells to their present condition.

Furthermore, both the size of the mitochondrion and its genome are an advantage in microscopic analyses. "And finally, it is much easier to follow a single mitochondrion and mitochondrial genome during cell division than to follow hundreds or even thousands at the same time", Torsten Ochsenreiter from the Institute of Cell Biology says.

For their study, the Bern research groups used a new microscope, which allowed them to look into trypanosomes and their mitochondria with a resolution of less than 50 nanometres. Here they could observe the distribution of the mitochondrial genome during cell division.

"We succeeded in describing in detail the machinery required for mitochondrial genome distribution during cell division in trypanosomes", Ochsenreiter says. This includes the precise order of components in the machinery, their size as well as interactions. They discovered that the cell initiates the construction after which every component is added one by one to the machinery.

Differently, from previously investigated organisms, trypanosomes appear to have developed most modules exclusively for their function in the mitochondrial genome distribution machinery.

Applicable to other diseases

"Along with the findings of the fundamental research, the study also provides new techniques, which can also be applied to other organisms in the future", Ochsenreiter explains. For example, the causes of the incorrect distribution of the mitochondrial genome can be studied in some human diseases, such as muscular disorders or even specific forms of cancer.

"But the differences discovered in the distribution machinery in parasites and humans are of particular interest for developing new medicines against the sleeping sickness and other illnesses caused by trypanosomes in humans and animals."