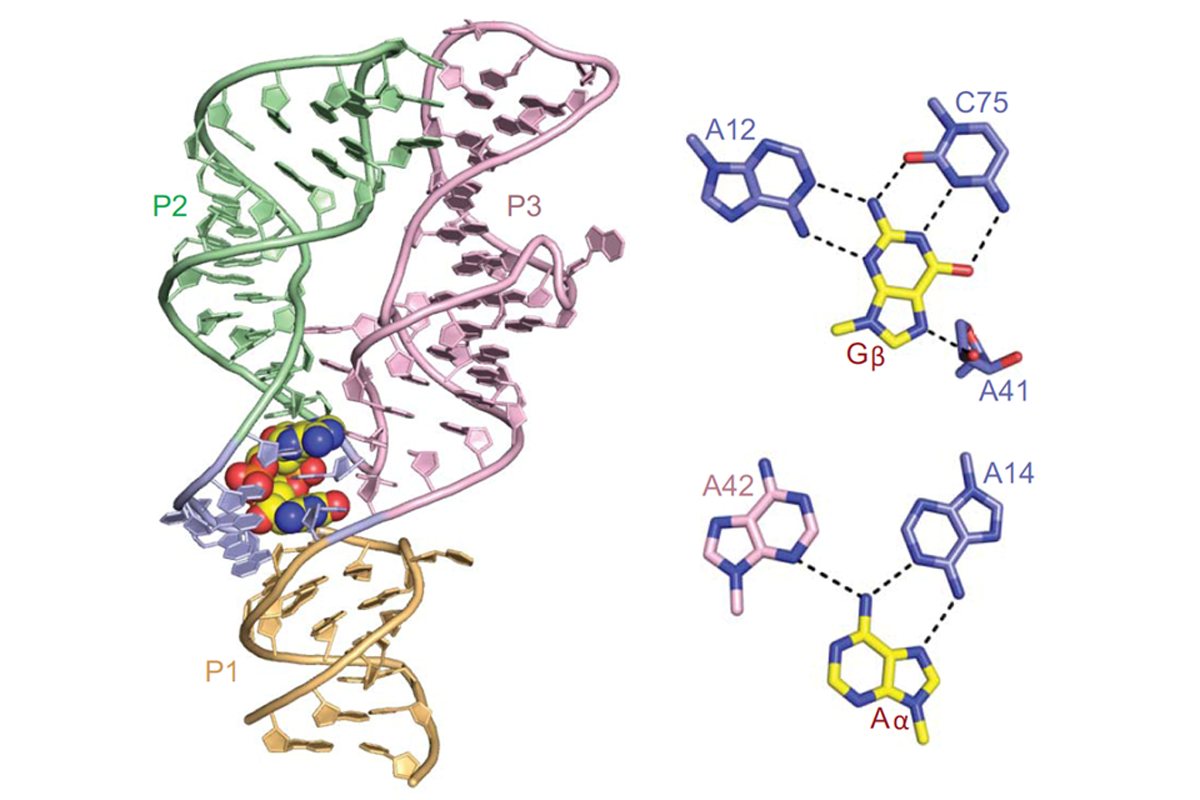 A new study examines that a common but little-understood bacterial switch that cuts off protein production before it begins. A new discovery that points to potential new antibiotic medicines,  Many gram-positive bacteria use T-box riboswitches to regulate the production of proteins that utilize amino acids, the basic building blocks of all proteins. The study was published in Nature Communications.

They describe how one of these switches, a glycine regulator in Bacillus subtilis, flips and locks into the "on" position via a snap-lock mechanism.  Engaging the lock increases production of proteins that utilize glycine, the simplest amino acid. Researchers also detailed the switch's "off" position:

T-box riboswitches are intriguing because they are regulated turned on or off by molecules central to protein production. While they were discovered a quarter-century ago, it's not been entirely clear how they operate. By highlighting their structural and kinetic details, we hope to spur interest in these switches as potential targets for new antibiotics. "Riboswitches are common in many bacteria, but not in humans, making them such attractive targets for new drugs.

T-box riboswitches regulate transcription, the writing of the messenger RNA itself, but use a locking arm borrowed from the translation machinery, making it a unique jack-of-all-trades. The mRNA blueprints are used to build proteins, the workhorses of biology. Cells employ millions of proteins at a given time, but each of these is made from the same 20 building blocks, the amino acids that T-box riboswitches help regulate in gram-positive bacteria.

To make a protein, cells string amino acids end to end, like beads on a necklace, based on the order specified in mRNA instructions. The locking arm trigger in the glycine T-box riboswitch is part of another molecule called transfer RNA (tRNA). There are many types of tRNA in cells, but each acts as a kind of car, shuttling payloads to the ribosome, where proteins are strung together. Each type of tRNA can only carry one type of amino acid.

In the new study, researchers designed an experiment in which glycine-specific tRNA molecules, some loaded with glycine and others unloaded, would pass by and randomly attach to a T-box riboswitch. Each time a tRNA with a fluorescent tag attached took up a position on the T-box riboswitch, a bright signal appeared under the microscope. By measuring exactly how long the signal lasted, and thus how long the molecules stayed in position, the team was able to reconstruct the binding speed and ultimately the locking mechanism for the switch.

Authors are attempting to use RNA templates for precision engineering of complex structures. In the active, locked position, the T-box-tRNA complex has a very stable three-dimensional shape. It is possible these could be exploited for ultra-stable ring-like complexes in novel biomimetic architectures.